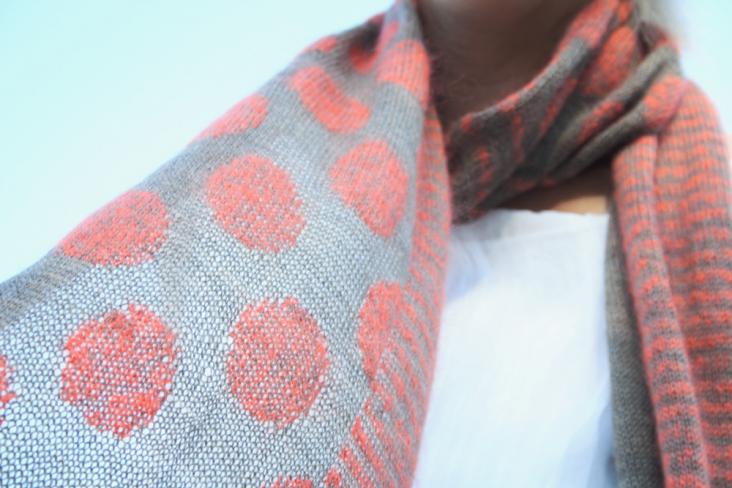 Inspired by the minimalistic elegance of Japanese Design Jana Huck created three scarfs in cooperation with ITO yarns. The designs inspire to playful experimentation and convince by their absolute modernity.

For all three scarves Jana Huck used the same technique: knitting with an extra strand of yarn to form the themes of stripes or dots which appear almost translucent on the knitted background. The technique she calls "false intarsia" and it can be successfully implemented also by inexperienced knitters.

Abacatha shows a line of pearls – almost like a necklace – which nicely accentuates the background of plain stocking stitch. A special effect is the noble wrinkle look of the scarf which is created by using ITO Washi and ITO Tetsu held together. The motif is then created by using an extra strand of ITO Sensai.

Imprinta captivates through its extraordinary texture achieved by using ITO Tebiki and ITO Kinu Kasuri in linen stitch for the background. The blue dots in ITO Kinu seem almost like printed on the surface of the scarf.  Imprinta is a scarf of tender elegance!

The pattern of “Rheindrops” playfully combines dots and stripes for an airy scarf. The main yarn is ITO Shio – a super light merino wool. The motifs are worked with an extra strand of ITO Sensai in contrasting color. The result is a wonderfully light and noble scarf.